What is an SREC? 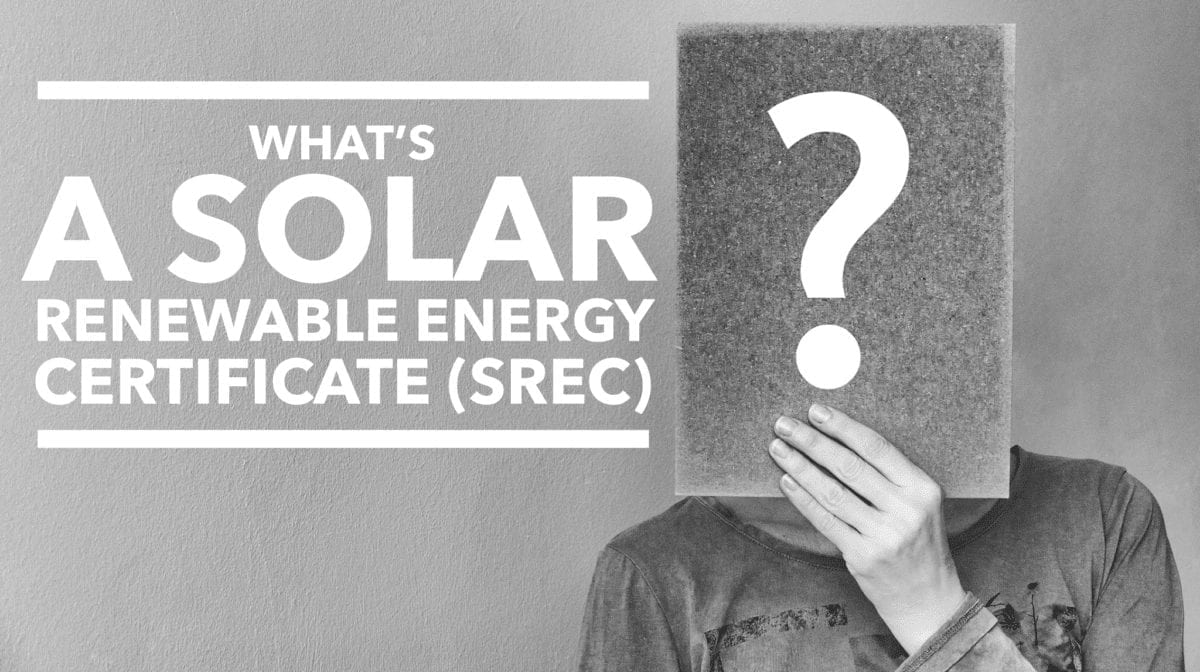 On a quarterly basis, we gather your energy production data and enter it into PJM-EIS GATS.  At the end of the month, the PJM-EIS GATS system generates serial number for each of your SRECs.  Any energy over 1000 kWh gets carried over to the next period.

As you SREC aggregator and broker, we take your SRECs along with hundreds or thousands of others and put them up for bid to other aggregators and energy companies. We agree on a settlement price and send you a check after the transaction is completed.

The settlement price is based on a number of things. The primary driver is the renewable portfolio standard (RPS) detailed below. Under the RPS, energy companies were basically given three choices: build their own solar, pay a fine (called the Solar Alternative Compliance Payment), or purchase an SREC.

So, if the SREC value is cheaper than building their own solar or paying the fine, they are typically going to purchase the SREC.  There are also supply and demand issues associated with how many SRECs are being offered -vs- how many are needed at a given time.

We typically recommend selling your SRECs if the market price is higher than the cumulative weighted average settlement price for that energy year.  SREC pricing reports can be downloaded at NJCEP.

The official definition of an SREC

How much is an SREC worth?

Electricity suppliers, the primary purchasers of SRECs, are required to pay a Solar Alternative Compliance Payment (SACP) if they do not meet the requirements of New Jersey’s Solar RPS. One way they can meet the RPS requirements is by purchasing SRECs. As SRECs are traded in a competitive market, the price may vary significantly.  The actual price of an SREC during a trading period can and will fluctuate depending on supply and demand.  SREC pricing reports can be downloaded at NJCEP.

We like to look at cumulative weighted average SREC settlement prices as a way to gauge the current market and help predict future trends.

How is the value of an SREC determined?

New Jersey is one of the fastest growing markets for solar photovoltaics in the U.S. The success is due to New Jersey’s solar financing model, which relies on strong Renewable Portfolio Standards (RPS). The New Jersey Legislature passed new solar legislation in 2012 that accelerates the state’s Solar Renewable Portfolio Standard (RPS); extends the RPS to the year 2028; extends a SREC life to five years; and adjusts the Solar Alternative Compliance Payment (SACP), among other things.

So, the RPS indicated the amount of solar that is required in each energy year and the SACP if the fine payment that the Energy Company must pay if they don't create their own solar power or purchase SRECs on the open market. The combination of the RSP, SACP and available SRECs on the market at a given time help determine the settlement price of the SREC.

According to New Jersey's Clean Energy Program, New Jersey's Renewable Portfolio Standard (RPS) was first adopted in 1999 and has been updated several times. In May 2018, A.B. 3723 increased the total RPS requirement in New Jersey to 35% by 2025 and 50% by 2030 where the specified percentage of electricity sold in the the state must come from qualified Class I renewable energy sources. In addition, 2.5% of the electricity each year must come from qualified Class II renewable energy source.

As it is set up today, the RPS includes two separate provisions for renewable energy. The first provision, which was part of the initial RPS goal requires each supplier/provider serving retail customers in the state to procure 50% of the electricity it sells in New Jersey from qualifying renewables by EY2030 (“energy year” 2030 runs from June 2029 – May 2030). Solar specific provision was added in later in 2010 (A.B. 3520) which requires suppliers and providers to procure additional maximum of 5.1% of sales (updated May 2018) from qualifying solar electric generation facilities by EY 2021, which is then gradually reduced to 1.100% by EY 2033.

The offshore wind provision added in August 2010 by S.B. 2036 is defined so that it will reduce the percentage of electricity sales that must be provided from other Class I renewable energy sources (see Class I description below). In other words, the addition of the offshore wind resource requirement will not increase the overall renewable energy targets.

The mandate sets different requirements for different types of renewable energy resources, termed “classes”. "Class I" renewable energy is defined as electricity derived from solar energy, wind energy, wave or tidal action, geothermal energy, landfill gas, anaerobic digestion, fuel cells using renewable fuels, and -- with written permission of the New Jersey Department of Environmental Protection (DEP) -- certain other forms of sustainable biomass. Class I renewable energy also includes hydroelectric facilities of 3 MW or less that are: placed in service after July 23, 2012 (the effective date of S.B. 1925); located in the state and connected to the distribution system; and, certified as low-impact by a nationally recognized organization based on a system that includes a variety of minimum criteria.

According to New Jersey's Clean Energy Program, if a supplier/provider is not in compliance for an energy year, the supplier/provider must remit an alternative compliance payment (ACP) and/or a solar alternative compliance payment (SACP) for the amount of RECs and solar RECs that were required but not submitted. The BPU determines prices for ACPs and SACPs, and reviews the prices at least once per year. The price of an ACP and an SACP is to be higher than the estimated competitive market cost of (1) the cost of meeting the requirement by purchasing a REC or solar REC, or (2) the cost of meeting the requirement by generating the required renewable energy.

The initial ACP and SACP levels were set by BPU order at $50 per MWh and $300 per MWh respectively in 2004. These levels were subsequently renewed several times without changes. The ACP remains unchanged at $50 per MWh. The modern SACP was established by BPU order in December 2007 as a rolling eight-year schedule beginning in EY 2009 (i.e., one additional year added to the back end of the schedule each year). In July 2012 S.B. 1925 established a 15-year schedule for EY 2014 - EY 2028.

How do I generate SRECs?

In New Jersey’s RPS rules, an SREC is issued once a solar facility has generated 1,000 kWh (1MWh) through actual metered production. The SREC represents all the clean energy benefits of electricity generated from a solar electric system. SRECs can be sold or traded separately from the power, thus providing solar system owners a source of revenue to help offset the cost of installation.

How long do I get SRECs for?

New applications accepted into the SREC program by the NJEP will receive SRECs for 10-years.  Please be aware that to conform with the Clean Energy Act of 2018 signed on May 23, 2018, the Board has proposed rules to close the SREC Registration Program to new registrants upon the state solar electricity generation's attainment of 5.1% of retail electricity sales or June 1, 2021 (whichever comes first). Until this time, all new registrations will receive SRECs for 10-years from the date their system has received permission to operate from the utility.

The Clean Energy Act, signed by Governor Murphy on May 23, 2018, included the following provision: "For all applications for designation as connected to the distribution system of a solar electric power generation facility filed with the Board after the date of enactment of P.L. 2018 c. 17 (C. 48:3-87.8 et al.) the SREC term shall be 10 years." L. 2018, c. 17, 2(d)(3).  On October 29, 2018 the New Jersey Board of Public Utilities clarified the language above as follows: NJ SREC Update: Implementation of New 10-year SREC Term.

Solar system owners can choose to sell their SRECs to a broker, aggregator, or Load Serving Entity (LSE) i.e. the electric suppliers and providers, who must buy SRECs to meet their RPS obligations. Some solar installers or project developers will offer to buy the SRECs as part of the project financing, thereby reducing the installation costs and hence the amount of capital needed up front to finance a project. All customers considering financing options for a solar installation should ask their installer about the value of SRECs and who will have the rights to claim them.

New Jersey’s Electric Distribution Companies (EDCs), who provide regulated electric transmission and distribution services, offer solar finance programs that provide competitive long term contracts for SREC off take or loans in exchange for the SREC amortization. The SRECs procured under each model are auctioned to buyers for use toward NJ RPS compliance by electric generation suppliers and providers.

How do I sell my SRECs?

Solar system owners can choose to sell their SRECs to a broker, aggregator, or Load Serving Entity (LSE) i.e. the electric suppliers and providers, who must buy SRECs to meet their RPS obligations. Green Sun Energy Services, manages, aggregates and sells SRECs for our clients.

What happens to my SRECs if I move?

We advise our clients to transfer the rights to their SRECs when the sell their house, and many of our clients use this as a negotiating tactic when trying to sell their property for more money.

That said, if you sell your house while there is an active SREC market in your state, you retain the rights to sell your system’s SRECs even after moving. That means that, even if you sell your home, you could still receive income from the solar panel system you installed for years after.

Please click on Get an Estimate for details on how many SRECs you can produce and how much "going solar" can save you.

Back to Solar FAQs